The Challenge: Champs vs. Pros

View source
watch 01:40
Boba Fett Returns - The Loop
Do you like this video?
Play Sound

Champs vs. Pros is a spin-off show featuring 10 of America's top athletes competing against challenge champions. Contestants will be competing to win $50,000 to donate to the charity of their choice.

Each episode of the six-week especial event The Challenge: Champs vs. Pros will focus on a different strength: Agility, Ingenuity, Brawn, Brains, Endurance, and Guts. Every week the winning team’s captain will choose one member of their team to go into the elimination round and the rest of the team will vote in their opponent. The losing team’s captain is automatically sent into elimination and their team will also nominate their opponent. The final male and female competitors of the season will be put to the ultimate test, showcasing each strength in one heart-pounding race for the chance to win $50,000 to donate to their favorite charity. 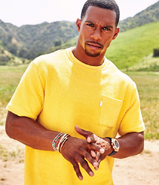