Start a Wiki
The Inferno 3 is the 14th season of the Real World/Road Rules Challenge. It premiered on April 10th, 2007 and concluded on July 10th, 2007 with the "Blazed and Confused: Top Ten Moments" special. It is the third installment in the Inferno trilogy and follows the 2005 season, The Inferno II.

Get prepared for the most intense Inferno yet. We're now 14 seasons into the Real World/Road Rules Challenge and this is the third Inferno, so expect the unexpected as we take 20 competitors deep into the wilds of South Africa. We've split these familiar individuals into two teams. One team is built from loyalty and trust. The other team is formed on a basis of manipulation and lies. Despite the differences between them, both teams have a common goal: Win. But what will they win? Oh, the prize is a very nice chunk of change. With each individual Challenge worth $15,000 and the final Challenge carrying a $150,000 price tag, there's more than $400 large at stake here. And only those who survive to reach the end get the money in their team's bank account and a shot at winning the final mission. Here's how Real World/Road Rules Challenge: Inferno 3 is going to work: Over the course of the competition, the Bad Asses and the Good Guys will compete in Challenges as teams and individuals. After each team mission, each team must choose someone from the opposition to go into The Inferno, alternating male and female selections week-by-week. Ah, but that won't necessarily seal their fate. Oh no. The chosen Bad Ass and Good Guy will be given an opportunity to save themselves from The Inferno. All they'll have to do is outperform their teammates during the next individual mission. If they do, they'll win the Life Shield. The Life Shield gives a competitor the option to chose someone else from their team to take their place and face off in The Inferno. Additionally, if someone else wins the Life Shield, that person could save the chosen team member by making the ultimate Real World/Road Rules Challenge sacrifice: opting to go into The Inferno in their place. As always, in The Inferno will put to the test the courage, endurance and strength of each of these competitors. But most of all, it will challenge their will to survive and the depth of their desire to take home the cash. Place your bets ... 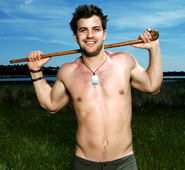 Bad Ass
Tyrie
Add a photo to this gallery

Retrieved from "https://thechallenge.fandom.com/wiki/Real_World/Road_Rules_Challenge:_The_Inferno_3?oldid=55680"
Community content is available under CC-BY-SA unless otherwise noted.